Inspired by one of our favorite shows, the Office, FriendFit will soon let you log Dwight Schrute’s favorite funtivities! Choose from an eclectic selection of Eastern Pennsylvania workouts including:

Grab your seed packet and shovel. Grow some delicious beets!

Watch a table-making demonstration, then grab your tools.

It’s in the name!

From purple to black belts, all are welcome.

Fights to the Death

At least one of the participants will log this activity.

“How hard could it be to add a single checkbox to a web page?” Our designer asked me this question as we planned a new feature to let users auto-tweet their activities. You’d think it would be as simple as sprinkling a little HTML, adding a bit of code on the server, and moving on to the next new feature. However, there was so much more to adding this single checkbox that I thought it would be interesting to share how much work a small change really can take.

First, we had to answer “Where should the checkbox go?” and “How should it look?”. Here’s what we came up with, simple and concise. Writing the HTML took less than a minute.

Now it was time to answer “What happens when the checkbox is clicked?”. We assumed most users would be connecting to their Twitter accounts for the first time, so we focused on this interaction. Here’s a breakdown of how it works:

Next, we needed to learn how to authorize a user’s Twitter account. Twitter uses a protocol called OAuth that lets users give publishing permissions to other websites. When you authorize FriendFit, we receive a special token that lets us tweet on your behalf. We need to store this token (a string of letters and numbers) in order to use it later.

This was our first time using OAuth and the Twitter API, and thankfully we found a great PHP library, TwitterOauth, to handle both. Using this library, we created a new pop up page to handle the entire connection process. This page first sends the user to Twitter, then saves the authorization token after the user accepts. To make things even friendlier, we give users the option to add their twitter username to their profile after they’ve connected. In order to store this new data, we needed to add a few new fields to our database.

Now that we have permission to tweet on a user’s behalf, we needed to figure out what were going to tweet. At a minimum, we wanted to share the type of activity, mileage, total time, calories burned, and a link to the new post. Because of Twitter’s 140-character limit per tweet, we now needed a way to create short links to individual posts. You may be already familiar with URL shortening services such as Bit.ly, but we felt that having the FriendFit brand in the URL was important. So we added a simple redirection page to handle these new links, making the appropriate change to apache’s .htaccess file. The new links look like this http://friendfit.com/a/lhj, and the Apache redirection rule is as follows:

At this point, we have both the permission to tweet and the tweet content. What’s left is actually publishing the new tweet! This required a few changes to our “FitBlog_saveNewPost()” function, both to accept a flag indicating the user’s desire to tweet, as well as actually sending it to Twitter. Since we use AJAX to save new posts, this required changes on both the server-side and client-side code. After much testing, everything worked seamlessly.

So now you know that often a checkbox is so much more than just a checkbox. Here’s a diagram I’ve seen a few times that neatly summarizes this point (sorry, I can’t seem to find the original source!). We, as programmers, must always look for ways to simplify the user experience and hide complexity from our users. This is the point where interfaces start to feel like “magic”.

So, what was your biggest implementation challenge for a so-called “small change”? Please share in the comments below.

We’re very happy to announce the new FriendFit Facebook application. Now you can log activities, draw routes, and send motivation without leaving Facebook or having to log in. In fact, we’ve made it easier for your friends to motivate you! Each time you share an activity on Facebook, your friends have a chance to post some motivation on your wall. Here’s a screenshot of the app’s homescreen: 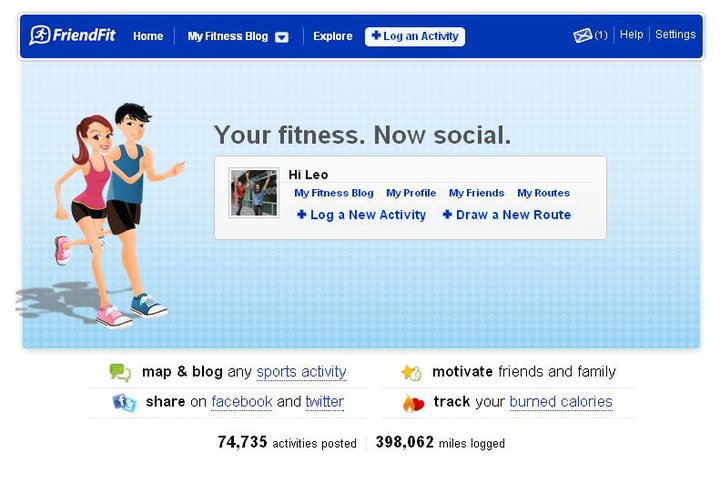 New and existing users can use FriendFit from the Facebook app, on the FriendFit.com site, or both! All of your data, including logged activities and routes will show up in both places. Privacy controls are applied consistently to both. Try the new FriendFit Facebook app now and leave us some feedback so we can improve.

We also took an opportunity to freshen up the FriendFit site in a few places. Fitness blog navigation is now a bit cleaner and compact, especially when the monthly or weekly summaryis displayed (see below). There’s still room for improvement, but we feel that this is a step towards simplicity.

Also, user profiles now show a more useful activity summary. This lets you quickly see what sports and fitness activities someone enjoys, and also gives you more info about each sport. Now you can see the total number of posts, total mileage, and total time for each kind of activity.

Introducing a series of posts written by a real doctor who’s here to answer your questions about fitness, health, and everything in between.

Please send your questions to: askthedoc@friendfit.com

With the modern means of transportation, communication, and work we find ourselves less and less active compared to our ancestors. They would walk, ride a horse, work all day on the farm or in a factory performing manual labor. Today’s cars, TVs, iPhones, computers, even Facebook all work together to nudge us towards an unhealthy level of inactivity.

People that sit for more than 23 hours a week, which is just about anyone with a desk job, have higher chances of getting heart disease. Besides scheduling in some time at the gym, here are three ways you can add exercise to your regular day:

We’ve been busy working on the FriendFit iPhone app, but there were a few web updates that were just asking to happen.

Many of you have asked for monthly and weekly stats, and we listened! You can now view fitness blogs in one of three views: Weekly, Monthly, and All (which just shows the last 10 posts). View a summary showing the total number of posts, mileage, time, and calories burned for that week or month. You can use the arrows to move backwards and forwards in time. Just click the selected view in the menu below the green Fitness Blog tab. View your fitness blog now!

We also worked to simplify the “Log a new activity” page and decided that it was finally time for the couch potato to retire. In its place, we now have color-coded dots to quickly keep track of how you felt during your activity. On the fitness blog post, you can see a single dot in the color chosen.

Our last update gave you the ability to rename routes, and now you can sort your route list by one of 3 options: date created, name, and distance. Just visit your route list and see for yourself.